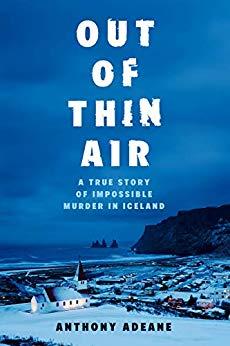 OUT OF THIN AIR: A TRUE STORY OF IMPOSSIBLE MURDER IN ICELAND

A copy that has been read, but is in excellent condition. Pages are intact and not marred by notes or highlighting. The spine remains undamaged. In 1974, two men vanished without a trace under suspicious circumstances, s hocking the people of Iceland, where serious crime is almost nonexistent. M ore than a year later, there seemed to be a breakthrough when a small-time crook named Erla Bolladottir described a dream to police that they interpre ted as a sign of trauma related to the men's disappearance. After lengthy interrogations, investigations, and courtroom dramas, Erla and five acquainta... View more info 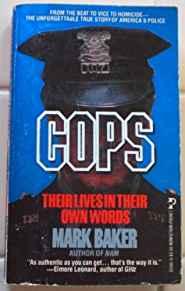 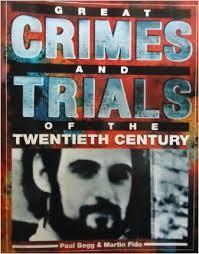 GREAT CRIMES AND TRIALS OF THE TWENTIETH CENTURY

A tight clean softcover, no markings throughout, NOT an ex-library edition. Based on the BBC-TV series. View more info 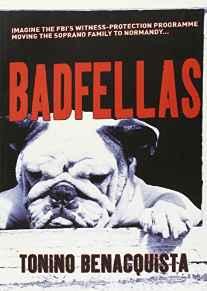 Under cover of darkness, an American family moves into a villa in Cholong-s ur-Avre in Normandy. Fred Blake, the father, tells everyone he is there to write a history of the Allied landings. His wife Maggie gets involved in a local charity; their teenage children enrol in the lycee. At first glance a family like any other. But Fred's real name is Giovanni Manzoni - an ex-Ma fia boss who has grassed and is now part of the FBI's witness-protection pr ogram. And his record in other locations would indicate that his cover is n ot likely to last very long. View more info

PORTRAIT OF A KILLER : JACK THE RIPPER - CASE CLOSED

Patricia Cornwell uses the demanding methods of modern forensic investigati on to re-examine the evidence in the Jack the Ripper murders. Naming the ki ller as the artist, Walter Sickert, Cornwell details the evidence for this conclusion and reveals the reaction from a senior police officer. View more info

PORTRAIT OF A KILLER: JACK THE RIPPER -- CASE CLOSED

A crisp clean softcover, no markings throughout: Jack the Ripper was renowned artist Walter Sickert (1860-1942) according to Cornwell, in case anyone hasn't yet heard. The evidence Cornwell accumulates toward that conclusion in this brilliant, personal, gripping book is very strong, and will persuade many. In May 2001, Cornwell took a tour of Scotland Yard that interested her in the Ripper case, and in Sickert as a suspect. A look at Sickert's "violent" paintings sealed her interest, and she became determined to apply, for the first time ever, modern investigatory and forensic techniqu... View more info 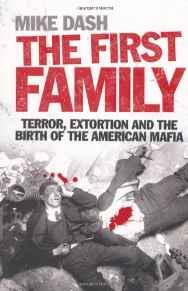 THE FIRST FAMILY TERROR, EXTORTION, REVENGE, MURDER, AND THE BIRTH OF THE A MERICAN MAFIA

Before Al Capone and Lucky Luciano, there was the one-fingered, cunning Giu seppe Morello and his murderous coterie of brothers. Had it not been for Mo rello, the world may never have heard of 'men of honour', the code of omert a or Mafia wars. This explosive book tells the story of the first family of New York, and how this extended close-knit clan of racketeers and murderer s left the backwaters of Sicily to successfully establish themselves as the founding godfathers of the New World. First Family will explain in thrilli ng, characterful detail how the American Mafia established itself so s... View more info 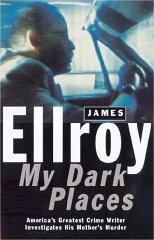 James Ellroy's trademark is his language: it is sometimes caustically funny and always brazen. When he's hitting on all cylinders, as he is in My Dar k Places, his style makes punchy rhythms out of short sentences using lingo such as "scoot" (dollar), "trim" (sex), and "brace" (to interrogate). But the premise for My Dark Places is what makes it especially compelling: Ellr oy goes back to his own childhood to investigate the central mystery behind his obsession with violence against women--the death of his mother when he was 10 years old. It's hard to imagine a more ps... View more info 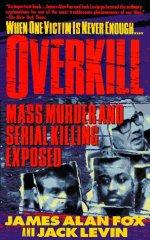 In a study that will be of interest primarily to criminologists, Fox and Le vin (Mass Murder) categorize serial killers into three types: those who mur der for thrills, those who believe they have a mission (e.g., to rid the wo rld of sin) and those who kill for expediency or profit. The authors mainta in that most serial killers are not insane, although many are sociopathic a nd most are loners. The same qualities apparently hold true for mass murder ers, with the additional characteristic that they are often individuals who have lost all hope. The authors' conclusions are disheartening: desp... View more info 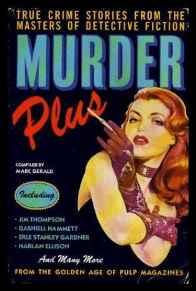 MURDER PLUS: TRUE CRIME STORIES FROM THE MASTERS OF DETECTIVE FICTION 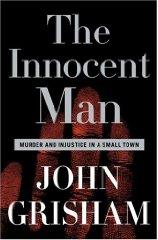 THE INNOCENT MAN: MURDER AND INJUSTICE IN A SMALL TOWN

A highly collectible first edition/printing, protected in a new brodart wra pper. John Grisham tackles nonfiction for the first time with The Innocent Man, a true tale about murder and injustice in a small town (that reads like one of his own bestselling novels). The Innocent Man chronicles the story of Ron Williamson, how he was arrested and charged with a crime he did not commit, how his case was (mis)handled and how an innocent man was sent to death row. Grisham's first work of nonfiction is shocking, disturbing, and enthralling--a must read for fiction and nonfiction fans. View more info 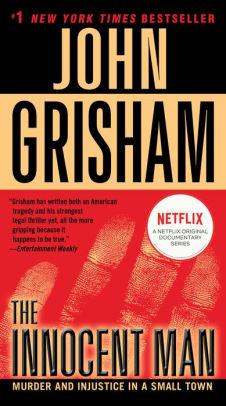 THE INNOCENT MAN: MURDER AND INJUSTICE IN A SMALL TOWN

John Grisham's first work of nonfiction, an exploration of small town justi ce gone terribly awry, is his most extraordinary legal thriller yet. In the major league draft of 1971, the first player chosen from the State o f Oklahoma was Ron Williamson. When he signed with the Oakland A's, he said goodbye to his hometown of Ada and left to pursue his dreams of big league glory. Six years later he was back, his dreams broken by a bad arm and bad habits drinking, drugs, and women. He began to show signs of mental illness. Unabl e to keep a job, he moved in with his mother and slept twenty hours ... View more info 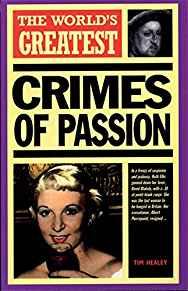 This book tells the stories of crimes committed in the frenzies and frustra tions of love - violent and tragic endings to a love story that has gone wr ong. Passion, jealousy, revenge, and despair are the themes, and the eterna l triangle is often the pattern. Here are true-life tales of romance, myste ry and horror! View more info

VENOM IN THE BLOOD

A horrifying account of the husband-and-wife team of serial killers, Gerald and Charlene Gallego, who terrorized California with a string of vicious s ex-murders. View more info 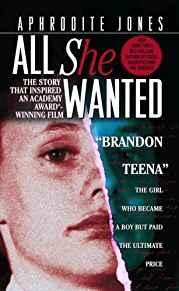 Explores the controversial life and violent death of twenty-one-year-old Te ena Brandon, who posed as a man in her flight from the law and her family, and who shared romantic relationships with several young women before she w as exposed and murdered. Original. View more info 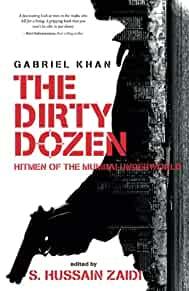 THE DIRTY DOZEN: HITMEN OF THE MUMBAI UNDERWORLD

A copy that has been read, but is in excellent condition. Pages are intact and not marred by notes or highlighting. The spine remains undamaged. The executioner has no remorse. He is the man who strikes the fear of his boss in everybody's heart. While he has no criminal empire of his own, his bloodthirsty bio-sketch could fill several police case diaries. Those who live by the bullet die by the bullet, but in their short reign of terror, the don's dirty dozen are dementors who suck lifetimes of happiness as they leave a trail of devastation in their wake. In this fascinating book, Gabriel Khan... View more info 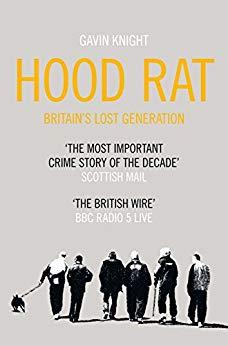 A copy that has been read, but is in excellent condition. Pages are intact and not marred by notes or highlighting. The spine remains undamaged. BBC RADIO 4 BOOK OF THE WEEK SHORTLISTED FOR THE ORWELL PRIZE 2012 SHORTLISTED FOR THE CRIME WRITERS ASSOCIATION NON-FICTION DAGGER AWARD 'THE MOST IMPORTANT CRIME STORY OF THE DECADE' Scottish Mail Manchester. London. Glasgow. In the summer of 2011 violence erupted in our inner cities and many blamed gang culture. But is the truth so simple? Hood Rat tells the human stories that the media miss: of young men who have fallen through the system, ... View more info

LaRosa, a journalist and TV producer who was won two Emmy Awards, does a fi ne job detailing the tragic chain of events that led to the 2003 murder of Crystal Brame at the hands of her estranged husband, David Brame, the chief of police of Tacoma, Wash., who immediately killed himself. That this murd er-suicide came as a shock to the local citizens was a testament both to th e timidity of the press and the mishandling of David Brame's growing instab ility and violence by city government, including fellow members of the poli ce force. View more info 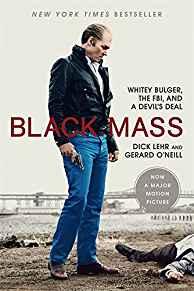 BLACK MASS: WHITEY BULGER, THE FBI, AND A DEVIL'S DEAL

A copy that has been read, but is in excellent condition. Pages are intact and not marred by notes or highlighting. The spine remains undamaged. A New York Times Bestseller A Boston Globe Bestseller An ABA Indie Bestseller James "Whitey" Bulger became one of the most ruthless gangsters in US histo ry, and all because of an unholy deal he made with a childhood friend. John Connolly a rising star in the Boston FBI office, offered Bulger protection in return for helping the Feds eliminate Boston's Italian mafia. But no on e offered Boston protection from Whitey Bulger, who, in a blizzar... View more info