THE AMERICANIZATION OF BENJAMIN FRANKLIN

From the most respected chronicler of the early days of the Republic-and wi nner of both the Pulitzer and Bancroft prizes-comes a landmark work that re scues Benjamin Franklin from a mythology that has blinded generations of Am ericans to the man he really was and makes sense of aspects of his life and career that would have otherwise remained mysterious. In place of the geni al polymath, self-improver, and quintessential American, Gordon S. Wood rev eals a figure much more ambiguous and complex-and much more interesting. Charting the passage of Franklin's life and reputation from relative po... View more info 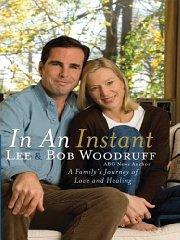 IN AN INSTANT: A FAMILY'S JOURNEY OF LOVE AND HEALING

A crisp clean softcover, no markings throughout:(large print edition) In January 2006, Lee and Bob Woodruff seemed to have it all-a happy marriag e, four beautiful children, and marvelous careers. Bob had just been named co-anchor of ABC's World News Tonight, but then, while he was embedded with the military in Iraq, an improvised explosive device went off near the tan k he was riding in. He and his cameraman, Doug Vogt, were hit, and Bob suff ered a traumatic brain injury that nearly killed him. In an Instant is the frank and compelling account of how Bob and Lee Woodruff's lives came togeth... View more info

THE ROAD TO NAB END AN EXTRAORDINARY NORTHERN CHILDHOOD 1999

DAUGHTER OF CHINA: A TRUE STORY OF LOVE AND BETRAYAL

A crisp clean softcover, no markings throughout: Both the memoir of a young Chinese peasant girl coming of age during the Cultural Revolution and a cross-cultural tragic romance which depicts the struggle between love for another individual and loyalty to one's country. Meihong begins life as an enthusiastic recruit of the People's Liberation Army, but she possesses a quickness of observation and critical insight which makes it impossible for her not to pick up on the many hypocrisies involved in her PLA training. One of the more revealing moments of the narrative is the drunken rebellion of a... View more info

A highly collectible first edition, tight clean copy, protected in a new br odart wrapper, no inscriptions, unclipped dustjacket, this is not an Ex-Lib or a BCE/BOMC edition. In 1989, Xinran, a Beijing journalist, began broadcasting a nightly program on state radio that was devoted entirely to personal affairs--a radical concept in Communist China. In response, she received thousands of letters from women, many with questions about sexuality; one woman wondered "why her heart beat faster when she accidentally bumped into a man on the bus." Eventually, Xinran persuaded her superiors to... View more info

THE YEAR THE DRAGON CAME

A tight clean softcover, no markings throughout, NOT an ex-lib edition. View more info

THE IRON LADY: A BIOGRAPHY OF MARGARET THATCHER

Young's probing political biography reveals how Thatcher changed the face o f the Conservative Party in a series of "mighty battles" with the old guard , tamed the trade unions, controlled inflation and unemployment and, by her conduct of the Falkland War and her dealings with Reagan and Gorbachev, em erged as a global leader. Reviewing her tenure as a combative, pragmatic pr ime minister with a driving sense of mission, Young, a journalist for the G uardian in England, concludes that Thatcher has displayed the virtues and v ices of "a ruthless crusading leader who knew she was rig... View more info