THE JAPANESE LOVER: A NOVEL

A copy that has been read, but is in excellent condition. Pages are intact and not marred by notes or highlighting. The spine remains undamaged. From New York Times bestselling author Isabel Allende, "a magical and sweep ing" (Publishers Weekly, starred review) love story and multigenerational e pic that stretches from San Francisco in the present-day to Poland and the United States during World War II. In 1939, as Poland falls under the shadow of the Nazis, young Alma Belasco' s parents send her away to live in safety with an aunt and uncle in their o pulent mansion in San Francisco.... View more info

DAUGHTER OF FORTUNE: A NOVEL

An orphan raised in Valparaíso, Chile, by a Victorian spinster and her rigi d brother, young, vivacious Eliza Sommers follows her lover to California d uring the Gold Rush of 1849 -- a danger-filled quest that will become a mom entous journey of transformation. In this rough-and-tumble world of panhand lers and prostitutes, immigrants and aristocrats, Eliza will discover a new life of freedom, independence, and a love greater than any ever dreamed. View more info

FOREST OF THE PYGMIES

From one of the world's best-loved storytellers comes a magical novel of ad venture and discovery Alexander Cold knows all too well his grandmother Kat e is never far from an adventure. When International Geographic commissions her to write an article about the first elephant-led safaris in Africa, th ey head-with Nadia Santos and the magazine's photography crew-to the blazin g, red plains of Kenya. Days into the tour, a Catholic missionary approache s the camp in search of his companions who have mysteriously disappeared. K ate, Alexander, Nadia, and their team, agreeing to aid the rescue, en... View more info

THE HOUSE OF THE SPIRITS

Spanning four generations, Isabel Allende's magnificent family saga is popu lated by a memorable, often eccentric cast of characters. Together, men and women, spirits, the forces of nature, and of history, converge in an unfor gettable, wholly absorbing and brilliantly realised novel that is as richly entertaining as it is a masterpiece of modern literature. Review "'This is a novel like the novels no one seems to write anymore: thick with plot and bristling with characters who play out their lives over three gen erations of conflict and reconciliation. A novel to be read for its brillia... View more info

A child of two worlds-the son of an aristocratic Spanish military man turne d landowner and a Shoshone warrior woman-young Diego de la Vega cannot sile ntly bear the brutal injustices visited upon the helpless in late-eighteent h-century California. And so a great hero is born-skilled in athleticism an d dazzling swordplay, his persona formed between the Old World and the New- the legend known as Zorro. View more info 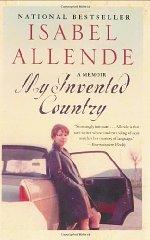 Allende was inspired to write this glimmering and audacious memoir of her l ife as a traveler, exile, and immigrant by an eerie overlaying of dates. Sh e lost a country, she writes, on Tuesday, September 11, 1973, when a milita ry coup brought down Chile's democratic government, then headed by Salvador Allende, a cousin of her father's. And she gained a country on Tuesday, Se ptember 11, 2001, when the terrorist attacks induced her to recognize her d eep allegiance to the U.S., her adopted land. Drawing on the profoundly flu ent storytelling skills and canniness that make her fiction so scinti... View more info