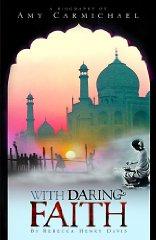 WITH DARING FAITH: A BIOGRAPHY OF AMY CARMICHAEL

In 1903 Amy Carmichael's book Things as They Are shocked many Englishmen an d Americans into taking a closer look at India. Unafraid of public criticis m, Amy Carmichael had revealed to the Western world the spiritual bondage o f India as well as the suffering of thousands under the supposedly "benign" religion of Hinduism. She raised a plea for the little children who were b eing sold into lives of shame as slaves in Hindu temples. Never content to do things man's way when the Lord was showing her a better way, Amy Carmichael was one of the first missionaries in India to adopt In dia... View more info