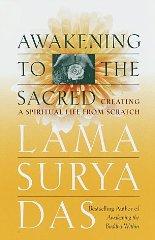 AWAKENING TO THE SACRED

A crisp clean first edition (as stated) no markings throughout, not an ex-l ib edition: Surya Das is like a Buddhist Johnny Appleseed, galavanting across the countryside, planting seeds of spirituality in bare patches of ground. He believes that we are all fertile soil for cultivating the sacred in everyday life. "We all have spiritual DNA," he says. In Awakening to the Sacred, Surya Das heightens his efforts to increase the planet's spirituality quotient by teaching people how to take advantage of their own spiritual resources. Whether Jewish, Christian, Buddhist, or atheist, we can a... View more info