A copy that has been read, but is in excellent condition. Pages are intact and not marred by notes or highlighting. The spine remains undamaged. "Fascinating...fun to read and will be the standard text of the defining er a of gay literati." - Philadelphia Inquirer In the years following World War II a group of gay writers established them selves as major cultural figures in American life. Truman Capote, the enfan t terrible, whose finely wrought fiction and nonfiction captured the nation 's imagination. Gore Vidal, the wry, withering chronicler of politics, sex, and history. Tennessee... View more info 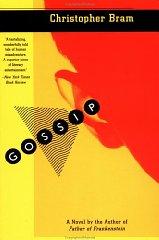 A crisp clean softcover, no markings throughout: Christopher Bram is one of the most praised writers of gay fiction, and Gossip is perhaps his best book to date. An incisive, savvy political thriller, Gossip tells the story of Ralph Eckhart, a denizen of the gay East Village and ACT UP member, who meets and starts an affair with Bill O'Connor, a closeted gay Republican journalist. After Ralph dumps Bill with an angry phone call (that has been taped), and O'Connor is soon found murdered, the police think they know who did it. Beautifully plotted and written, Christopher Bram has written a novel... View more info