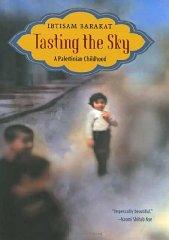 TASTING THE SKY: A PALESTINIAN CHILDHOOD

A crisp clean first edition (as stated) no markings throughout: In a spare, eloquent memoir, Barakat recalls life under military occupatio n. In 1981 the author, then in high school, boarded a bus bound for Ramalla h. The bus was detained by Israeli soldiers at a checkpoint on the West Ban k, and she was taken to a detention center before being released. The episo de triggers sometimes heart-wrenching memories of herself as a young child, at the start of the 1967 Six Days' War, as Israeli soldiers conducted raid s, their planes bombed her home, and she fled with her family across the bo rder t... View more info