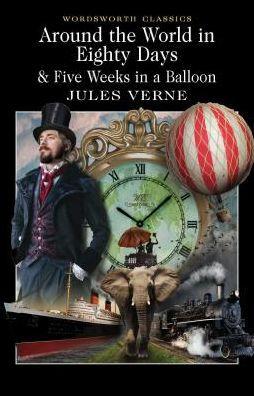 A copy that has been read, but is in excellent condition. Pages are intact and not marred by notes or highlighting. The spine remains undamaged. Around the World in Eighty Days (French: Le tour du monde en quatre-vingts jours) is an adventure novel by the French writer Jules Verne, published in 1873. In the story, Phileas Fogg of London and his newly employed French v alet Passepartout attempt to circumnavigate the world in 80 days on a 20,0 00 wager (2,242,900 in 2019) set by his friends at the Reform Club. It is one of Verne's most acclaimed works. The story starts in London on Wednesday, 2 October 1872. Phileas Fogg is a rich British gentleman living in solitude. Despite his we alth, Fogg lives a modest life with habits carried out with mathematical pr ecision. Very little can be said about his social life other than that he i s a member of the Reform Club, where he spends much of every day. Having di smissed his former valet, James Forster, for bringing him shaving water at 84 F (29 C) instead of 86 F (30 C), Fogg hires Frenchman Jean Passepart out as a replacement. At the Reform Club, Fogg gets involved in an argument over an article in The Daily Telegraph stating that with the opening of a new railway section in India, it is now possible to travel around the world in 80 days. He accepts a wager for 20,000 (2,221,600 in 2018),[4] half of his total fortune, from his fellow club members to complete such a journey within this time period. With Passepartout accompanying him, Fogg departs from London by train at 8:45 p.m. on 2 October; in order to win the wager, he must return to the club by this same time on 21 Decemb.

Title: AROUND THE WORLD IN EIGHTY DAYS