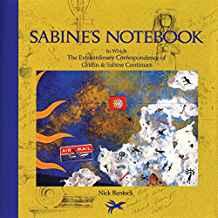 A copy that has been read, but is in excellent condition. Pages are intact and not marred by notes or highlighting. The spine remains undamaged. Don't miss The Pharos Gate, the final volume in the Griffin & Sabine story. Published simultaneously with the 25th-anniversary edition of Griffin & Sa bine, the book finally shares what happened to the lovers. Griffin--Foolish man. You cannot turn me into a phantom because you are fri ghtened. You do not dismiss a muse at a whim. If you will not join me, then I will come to you. --Sabine Sabine was supposed to be imaginary, a friend and lover that Griffin had cr eated to soothe his loneliness. But she threatens to become embodied, to ap pear on his doorstep, in fact. So he runs. Griffin & Sabine, the most creative and talked-about bestseller of 1991, le ft readers on the edge of a precipice. With Sabine's Notebook, they begin-- along with Griffin--the fall. Once again, the story is told through strange ly beautiful postcards and richly decorated letters that must actually be p ulled from their envelopes to be read. But this volume is also a sketchbook and diary kept by the possibly unreal Sabine, who is living in Griffin's h ouse in London while he wanders through Europe, North Africa, and Asia, bac kwards through layers of ancient civilizations--and of himself. Filled with her delicately macabre drawings and notations, the notebook adds a darker element of visual intrigue to their complex and mysterious world. For the thousands who finished Griffin & Sabine and asked, "What happened next?," this second volume in the quartet provides the answers--but raises new and even more haunting qu.

Title: SABINE'S NOTEBOOK: IN WHICH THE EXTRAORDINARY CORRESPONDENCE OF GRIFFIN & S ABINE CONTINUES