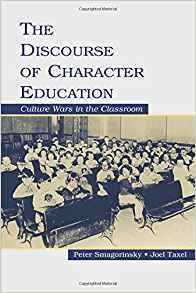 In excellent condition. Pages are intact and not marred by notes or highlig hting. The spine remains undamaged. In this book Peter Smagorinsky and Joel Taxel analyze the ways in which the perennial issue of character education has been articulated in the United States, both historically and in the current character education movement t hat began in earnest in the 1990s. The goal is to uncover the ideological nature of different conceptions of c haracter education. The authors show how the current discourses are a conti nuation of discourse streams through which character education and the nati onal purpose have been debated for hundreds of years, most recently in what are known as the Culture Wars--the intense, often passionate debates about morality, culture, and values carried out by politicians, religious groups , social policy foundations, and a wide range of political commentators and citizens, in which the various stakeholders have sought influence over a w ide range of social and economic issues, including education. The centerpiece is a discourse analysis of proposals funded by the United States Department of Education's Office of Educational Research and Improvement (OERI). Discourse profiles from sets of states that exhibit two distinct conceptions of character are examined and the documents from particular states are placed in dialogue with the OERI Request for Proposals. One profile reflects the dominant perspective promoted in the U.S., based on an authoritarian view in which young people are indoctrinated into the value system of presumably virtuous adults through didactic instruction. The other reflects the wel.

Title: THE DISCOURSE OF CHARACTER EDUCATION: CULTURE WARS IN THE CLASSROOM