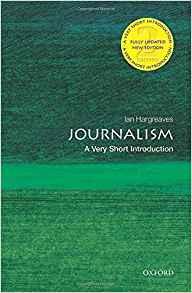 A copy that has been read, but is in excellent condition. Pages are intact and not marred by notes or highlighting. The spine remains undamaged. Journalism entered the twenty-first century caught in a paradox. The world had more journalism, across a wider range of media, than at any time since the birth of the western free press in the eighteenth century. Western jour nalists had found themselves under a cloud of suspicion: from politicians, philosophers, the general public, anti-globalization radicals, religious gr oups, and even from fellow journalists. Critics argued that the news indust ry had lost its moral bearings, focusing on high investment returns rather than reporting and analyzing the political, economic, and social issues of the day. In the new edition of this thought-provoking and provocative Very Short Introduction, Ian Hargreaves examines the world of contemporary journalism. He considers how technology has impacted the way major international events are reported, examines the development of online entertainment journalism, and chronicles the impact of the international financial crisis on the industry. By looking not only at what journalism has been in the past, but also what it is becoming in the digital age, major issues related to reportage, warfare, celebrity culture, privacy, and technology worldwide are closely examined.