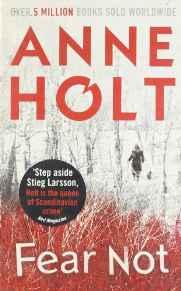 The silent, snow-covered streets of Oslo are a perfect scene of Christmas t ranquillity. But over the tolling of bells for the last Sunday of Advent, a black note sounds. A boy's -body washes up near the shoreline of the city' s Aker Bridge. His corpse is bloated by the water, almost unrecognisable. N obody has even bothered to report him missing. One week later, the bishop o f Bergen is found stabbed to death on a deserted street. Eva Karin Lysgaard is a popular public figure, a sixty-two year-old grandmother: why was she on a lone errand in the deserted city, on the night before Christmas? Johan ne Vik, criminal researcher and police profiler, is called in to untangle t he motivation behind the bishop's murder. But with her husband at the head of this increasingly high-profile investigation, Vik's association with the case is under intense scrutiny. And why does Lysgaard's shocking death lea d her towards the sad death of an unknown boy? The fourth instalment in the gripping Vik/Stubo series.