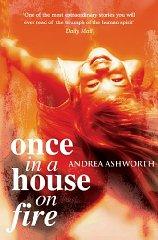 In her engrossing memoir, Once in a House on Fire, Andrea Ashworth recalls growing up poor in a violent English household during the 1970s and 1980s. Ashworth's father drowned when she was just 5. Her mother then married a ma n who beat her frequently and made life miserable for the whole family. Whe n Ashworth's mother finally got rid of him, she married a small-time crimin al who also soon became violent. Throughout her childhood, the author strug gled to protect her little sisters from their stepfathers and kept the fami ly going when their mother could not function because of her injuries, depr essions, and blinding headaches. Ashworth and her family moved around quite a bit, often living in other people's houses, sleeping in cots or on floor s. They all suffered from the emotional and economic instability of their s ituation. Ashworth recalls the sunglasses her mother wore through cloudy da rk English winters to conceal her bruised eyes. She also remembers sneaking out of the house one day to run through a rich neighborhood, where she pau sed occasionally to open the mailboxes of the wealthy and smell their comfo rt and safety. Although Ashworth's story is all about loneliness and love gone wrong, the surprising thing is that this book is not always terribly sad-- there are interludes when the children have fun and in those sunny moments it seems probable that all of them, especially Andrea, will survive more or less intact. Ashworth recalls the details of her childhood vividly, in brief scenes. In one of those scenes, two sisters race down a cobbled street at breakneck speed. Each of them has one roller skate on--they are shar.

Title: ONCE IN A HOUSE ON FIRE - CHILDREN'S EDITION