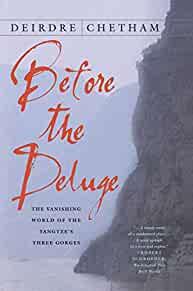 "I first sailed the Yangtze in 1983 on the Kun Lun, a foreign-leased cruise ship that went back and forth in seedy glamour between Shanghai and Chongq ing. Over the next years, I made many trips along China's longest river, mo st often on its upper reaches, the section between western Hubei province a nd central Sichuan province in which the Three Gorges, a spectacular 120-mi le stretch of mountains, ravines, and once deadly currents, are located. On board ship, I lectured to foreign tourists about Chinese history, shepherd ed them in and out of museums and factories, took them to hospitals, and di spatched them onward when necessary on stretchers and in urns. These long, leisurely, and contradictory trips, full of strange and fleeting intimacies , gave me my first introduction to river life." So begins Deirdre Chetham's elegiac book about the towns along the banks of the Three Gorges area of t he Yangtze River, written on the very eve of their destruction. The Yangtze flows 3,900 miles eastward from its source on the Tibetan-Qinghai plateau, where the Mekong and Salween also make their start, to Shanghai and the Ea st China Sea. After great controversy, the Chinese government has begun con struction of the world's largest hydroelectric dam in the Three Gorges sect ion of the Yangtze, a place renowned for its beauty. For over two thousand years, the Yangtze has been the great transport route linking the coast wit h the west and southwest and providing irrigation for the farms that fed Ch ina. Once the dam is completed in 2009, the water level will rise as much a s 350 feet in a hundred-mile stretch of the river. The water will submerge.

Title: BEFORE THE DELUGE