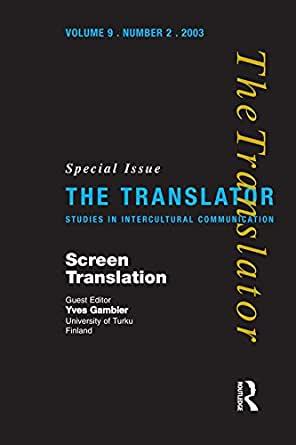 A copy that has been read, but is in excellent condition. Pages are intact and not marred by notes or highlighting. The spine remains undamaged. There are three fundamental issues in the field of screen translation, name ly, the relationship between verbal output and pictures and soundtrack, bet ween a foreign language/culture and the target language/culture, and finall y between the spoken code and the written one. All three issues are raised and discussed by contributors to this special issue of The Translator. The topics covered include the following: the use of multimodal transcription for the analysis of audiovisual data; the depiction and reception of cultural otherness in Disney animated films produced in the 1990's; the way in which subtitles in Flanders strengthen the already streamlined narratives of mainstream film stories, and how they 'enhance' the characteristics of the films and their underlying ideology; developing a research methodology for testing the effectiveness of intralingual subtitling for the deaf and hard of hearing; the pragmatic, semiotic and communicative dimensions of puns and plays on words in The Simpsons; the reception of translated humour in the Marx Brothers' film Duck Soup; and non-professional interpreting in live interviews on breakfast television in Finland.