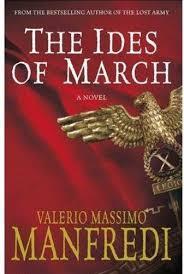 March, 44 BC. Rome, in all her glory, has expanded her territories beyond t he wildest dreams of her citizens, led by Caius Julius Caesar - Pontifex Ma ximus, dictator perpetuo, invincible military leader and only fifty-six yea rs old. He is a man in command of his destiny, who wields enormous power th roughout the vast empire. However his god-given mission - to end the blood- splattered fratricidal wars, reconcile implacably hostile factions and pres erve Roman civilization and world order - is teetering dangerously close to collapse. His power is draining away. None of his supporters can stop the inexorably evolving plot against him and prophecy will explode into truth o n the Ides of March and the world will change forever. This is political thriller laced through with all the intrigue and action surrounding one of the most crucial turning points in the history of western civilization.

Title: THE IDES OF MARCH