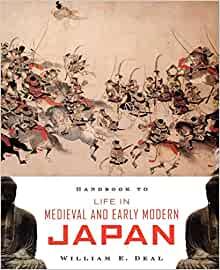 A copy that has been read, but is in excellent condition. Pages are intact and not marred by notes or highlighting. The spine remains undamaged. Handbook to Life in Medieval and Early Modern Japan spans the beginning of the Kamakura period in 1185 through the end of the Edo (Tokugawa) period in 1868. The medieval and early modern eras in Japan were largely shaped by t he rise of the warrior class. After 1603, with the founding of the Tokugawa shogunate, Japanese culture changed dramatically, but as cities grew and m erchants thrived, the warrior class became less dominant. By the end of the Edo period, Japan's insular feudal society and military government became irrelevant in an increasingly consumer-oriented economy and thriving urban culture. The contribution of military rulers, celebrated warriors, and cultural inno vators to medieval and early modern Japanese culture are well documented. H owever, life at the village level also had a strong impact on the culture. Covering both levels of society, this comprehensive guide provides insightf ul information on well-known people and peasants, artisans, shopkeepers, an d others outside the periphery of power. Handbook to Life in Medieval and E arly Modern Japan introduces the reader to the significant people and event s-cultural, social, political, and historical-and the everyday experiences and elements of material culture during this time. Organized thematically, the text covers: History; Land, Environment, and Population; Government; Society and Economy; Warriors and Warfare; Religion; Philosophy, Education, and Science; Language and Literature; Performing Arts; Art and Archite.

Title: HANDBOOK TO LIFE IN MEDIEVAL AND EARLY MODERN JAPAN