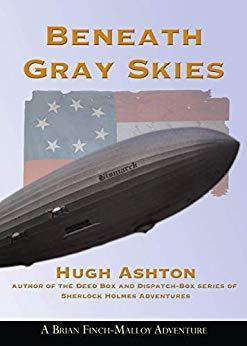 A copy that has been read, but is in excellent condition. Pages are intact and not marred by notes or highlighting. The spine remains undamaged. David Slater, a conscript in the 1920s Army of the Confederacy, faces a dil emma. When he and his regiment were shipped to Germany to help stage a coup there, his Limey fellow-soldier Brian was acting strangely. David now has the choice of reporting his best friend to his commanding officers, or keep ing quiet and just doing his job: preparing for the arrival of Bismarck, th e giant Zeppelin flying Hitler and his Nazi cohorts to meet their new allie s, the Confederates. Beneath Gray Skies follows the adventures of David and those around him in a past that never happened-where the Civil War never took place, and the Co nfederacy survived as a pariah slave-holding nation into the 20th century. Confederates, Unionists, British and Germans plot and counterplot in a tigh tly woven tale of espionage, treachery and romance. The cast of Beneath Gray Skies includes rogue British agent "Bloody Brian" Finch-Malloy, hard-drinking Henry Dowling, and Christopher Pole, a slave wh o escapes from the hell of the Confederacy-living against a backdrop that i ncludes real historical characters. Adolf Hitler, Hermann Goering, and Dr. Hugo Eckener, the brilliant anti-Nazi Zeppelin captain, all live again in t his "extraordinarily well-written piece of mind candy that becomes more and more difficult to put down" (Christopher Belton). Almost without realizing what has happened, David finds himself part of a conspiracy within the Confederacy that includes "Bloody Brian", which is working to prevent the airship's a.

Title: BENEATH GRAY SKIES : A NOVEL OF A PAST THAT NEVER HAPPENED