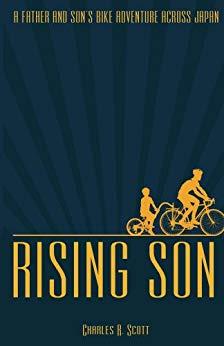 A copy that has been read, but is in excellent condition. Pages are intact and not marred by notes or highlighting. The spine remains undamaged. Rising Son is a travel adventure that celebrates the bond between a father and son. Charles Scott puts his corporate job on the line to ride connected bicycles 2,500 miles across Japan with his eight-year-old son, Sho. Charles believes that a child can accomplish much more than most adults thi nk and maps out a 67-day route that stretches from the northernmost cape to the southern tip of the mainland, passing through many of Japan's most fam ous cultural sites and over an entire mountain chain. Sho hopes to find the greatest game room in the country and maybe try some fishing along the way . On the trip, which is often harrowing, they raise money for a global tree planting campaign, are named "Climate Heroes" by the United Nations, and e xplore the limits of quality father-son time. Rising Son offers an inspiration to anyone who feels the urge to shake things up and reminds the reader of the most precious gift a parent can give a child: time.