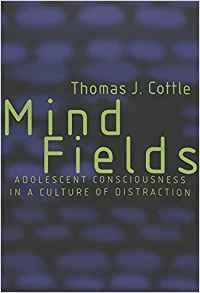 In Mind Fields, Thomas J. Cottle argues that the period known as adolescenc e is essentially a social construct influenced greatly by popular culture. To understand young people, therefore, is to recognize how the very conscio usness of adolescents is shaped by a culture, dominated by the entertainmen t industry, and the power of television and the computer, constantly urging them to turn away from the normal evolution of their personal and social l ives. In this fundamentally distracting environment, young people explore t heir consciousness, sharing it with others, as well as form their sense of identity, all the while having these most inner experiences affected as muc h by the culture as by their own temperaments and personalities. It is the culture that determines the forms of recognition and independence, as well as intimacy and attachment that adolescents must learn. In the end, the aut hor argues for the value of self-reflection as a critical ingredient of ide ntity formation and a fundamental antidote to distracting cultural influenc es.

Title: MIND FIELDS: ADOLESCENT CONSCIOUSNESS IN A CULTURE OF DISTRACTION