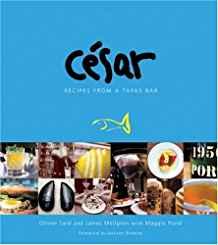 A copy that has been read, but is in excellent condition. Pages are intact and not marred by notes or highlighting. The spine remains undamaged. When three Chez Panisse alums opened a tapas bar next door to Alice Waters's famed Berkeley, California, restaurant, it was only a matter of days before a culinary star was born. With its menu of innovative, Spanish-style tapas, paired with an astounding wine-and-spirits list that is among the best in the world, César earned a legion of devout fans and was named one of the best restaurants in the Bay Area by the San Francisco Chronicle.In CÉSAR the cookbook, restaurateur Olivier Said teams up with Spanish-foods authority James Mellgren and chef Maggie Pond to present over 100 classic spirits and tapa recipes from the CÉsar repertoire. Engaging discussion of the wines, staple ingredients, and cheeses of Spain provide context for appreciating and preparing this robust fare in the home kitchen. In both words and images, CÉSAR showcases the flavors of Spain, and the spirit of a beloved neighborhood tapas bar.Featuring more than 50 tapa recipes, 50 mixed drinks, extensive essays on Spanish foods and liquors of the world, and more than 50 full-color photographs.Beginning with a captivating history of sherry--the quintessential tapa accompaniment-- CÉSAR commences with a mixologist's guide to signature cocktails like the Lucky 13, the Marius, and the Three-Citrus Margarita, as well as the restaurant's inspired variations on the classics.CÉSAR has been voted one of the best restaurants in the Bay Area five years in a row by the San Francisco Chronicle. Reviews"Humorously self-conscious an.