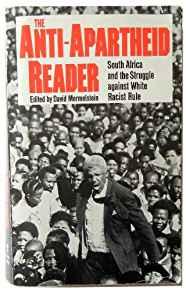 This collection will be a useful companion to Roger Omond's The Apartheid H andbook ( LJ 1/86), giving detail to some of the statistics and definitions found there. One could argue about some choices for inclusion. For example , there is nothing written by a black South African in the section on scena rios for the future. Surely more than one brief interview with ANC leader O liver Tambo could have been included. Current material from the United Demo cratic Front and the new Congress of South African Trade Unions (organized in 1985) would have been valuable. Other material from 1985 and 1986 is inc luded. At times the editing seems heavy-handed, as in a speech by Nelson Ma ndela. Nevertheless, what is included will be valuable for most libraries, especially as it places the actions of the United States in historical cont ext. Maidel Cason, Univ. of Delaware Lib., Newark - Library Journal - Libra ry Journal.