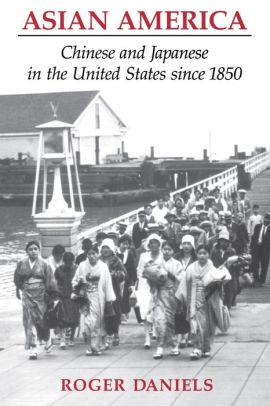 A copy that has been read, but is in excellent condition. Pages are intact and not marred by notes or highlighting. The spine remains undamaged. In this important and masterful synthesis of the Chinese and Japanese exper ience in America, historian Roger Daniels provides a new perspective on the significance of Asian immigration to the United States. Examining the peri od from the mid-nineteenth century to the early 1980s, Daniels presents a b asic history comprising the political and socioeconomic background of Chine se and Japanese immigration and acculturation. He draws distinctions and po ints out similarities not only between Chinese and Japanese but between Asi an and European immigration experiences, clarifying the integral role of As ians in American history. Daniels' research is impressive and his evidence is solid. In forthright pr ose, he suggests fresh assessments of the broad patterns of the Asian Ameri can experience, illuminating the recurring tensions within our modern multi racial society. His detailed supporting material is woven into a rich histo rical fabric which also gives personal voice to the tenacious individualism of the immigrant. The book is organized topically and chronologically, beginning with the emigration of each ethnic group and concluding with an epilogue that looks to the future from the perspective of the last two decades of Chinese and Japanese American history. Included in this survey are discussions of the reasons for emigration; the conditions of emigration; the fate of first generation immigrants; the reception of immigrants by the United States government and its people; the growth of imm.

Title: ASIAN AMERICA: CHINESE AND JAPANESE IN THE UNITED STATES SINCE 1850