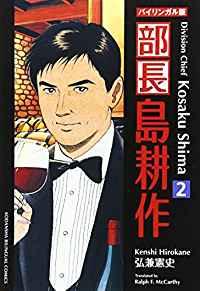 A copy that has been read, but is in excellent condition. Pages are intact and not marred by notes or highlighting. The spine remains undamaged. At the start of the long-running series, Shima Kōsaku is a kachō, or section chief, of a huge conglomerate, Hatsushiba Electric. He is later promoted to buchō (division chief) and eventually promoted to manager and executive-director, and with each promotion the title of the series changed as well. He is now promoted to the president of Hatsushiba Electric. And the title changed "Shachō" Shima Kōsaku, which means "President Kōsaku Shima". The fictional conglomerate is modeled after Panasonic, or Matsushita Electric, where Hirokane worked before and is highly accurate in its portrayal of Japanese corporate culture.