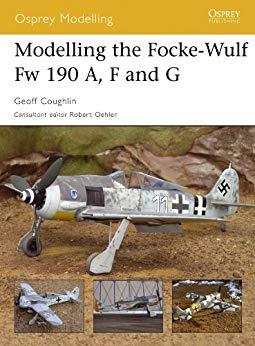 A copy that has been read, but is in excellent condition. Pages are intact and not marred by notes or highlighting. The spine remains undamaged. The Focke-Wulf Fw 190 is regarded as one of the best fighters of World War II. Designed by Kurt Tank, it first saw combat in the summer of 1941 and we nt on to be produced in several variants. It remains a hugely popular subje ct for aviation scale-modellers. This book, the first of two to cover the F w190, provides a detailed, step-by-step guide to modelling the Fw 190's A, F and G variants in 1/72, 1/48, and 1/32 scale. Key aspects such as creatin g mottled camouflage patterns, undercarriage and cockpit detailing, final w eathering and finishing, and diorama bases to display your models are cover ed. Editorial Reviews Review "Overall, another really great addition to the Osprey series of manuals... Well written, super photography, and excellent instruction all combines int o a definite thumbs up1 Highly recommended from this modelers' point of vie w." -Mark Smith, AeroScale "Everything of import is covered and the photo coverage is quite good, show ing some of the more difficult steps in the sort of detail that most of us appreciate when trying to duplicate it. Overall a good book and one that I' m sure Wurger fans will find much to their liking." -Scott Van Aken, modeli ngmadness.com "Another book about the Fw 190 has been published by Osprey and one could w onder why, as everything seems to have been written on that subject. But fo r modelers, if you would have to choose only one, it could well be Geoff Co ughlin's Modeling the Fw 190 A, F and G!" -Jean-Luc Formery, AeroScale Review.