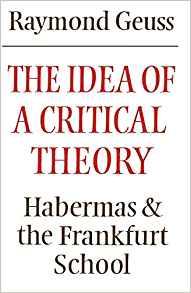 Habermas and earlier members of the Frankfurt School have presented critica l theory as a radically new form of knowledge. It is differentiated from th e natural sciences as essentially 'reflective': the knowledge it provides g uides us towards enlightenment as to our true interests, and emancipation f rom often unsuspected forms of external and internal coercion. Its first pa radigms are in the writings of Marx and Freud. In this book Raymond Geuss s ets out these fundamental claims and asks whether they can be made good. Is a science which does not simply describe and explain social phenomena, but also criticizes? The concept of ideology plays a crucial role in this disc ussion. Geuss carefully analyses it here, its relation to our beliefs and i nterests, and the account of truth and confirmation required by its critiqu e and the concomitant goal of self-knowledge. The book does not presuppose acquaintance with the works of the Frankfurt School and can serve as a luci d introduction to their central, distinctive theses. But in its scrupulous and incisive consideration of these, and the modified support for them that emerges, it will also interest experts on critical theory and others conce rned with the methods and purposes of the social sciences in general.

Title: THE IDEA OF A CRITICAL THEORY: HABERMAS AND THE FRANKFURT SCHOOL (MODERN EU ROPEAN PHILOSOPHY)