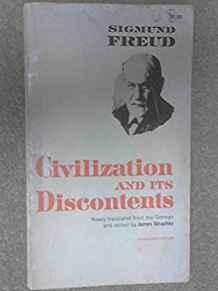 Civilization and Its Discontents, is one of the last of Freud's books, writ ten in the decade before his death. In it he makes known his views on the b road question of man's place in the world, which he sees in terms of the ne ver-ending conflict of he claim of the individual for freedom and the deman ds of society. Writing of the book, The Spectator says: "The theme is a ver y simple one which has often been foreshadowed in Fredu's earlier work. Civ ilization is only made possible by individual renouncement. The instinctive life of man is one of aggression and egoistic self-satisfaction. The whole structure of culture has been designed to put prohibitions and curbs on hi m.... The sense of guilt has become the maker of civilized humanity.... The theme is developed with the greatest richness of content and one might use many columns without exhausting the invaluable dicta of men and their inst itutions which strew the book." Throughout the period when Freud wrote his major works, various translations and edition, differing widely in the accu racy of their texts and the quality of their content, made their appearance . Increasingly, as the body of Freud's work achieved commanding stature, th e need arose for a definitive and uniformly authentic English language edit ion of all his writings. The Standard Edition of the Complete Psychological Works of Sigmund Freud was undertaken to achieve this goal. The work is un der the general editorship of James Strachey and he himself has made new tr anslations of many of his writings, supervising the emendation of others an d contributing valuable notes, both bibliographical and explanatory.

Title: CIVILIZATION AND ITS DISCONTENTS

Publisher: Hogarth Press and the Instit: 1961