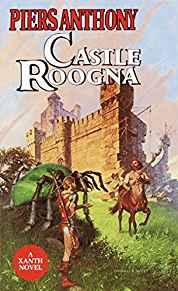 A copy that has been read, but is in excellent condition. Pages are intact and not marred by notes or highlighting. The spine remains undamaged. Once upon a past. . . . Millie had been a ghost for 800 years. But now, restored by the magic of Xa nth, she was again a maddeningly desirable woman. She could have had any ma n she wanted . . . except the one she did want, Jonathan the zombie. To gra nt Millie her desire, and to prove his right to rule Xanth in the future, y oung Magician Dor embarked on a quest for the elixir which would restore Jo nathan to full life. But the potion could be found only in the past . . . so, through a magic ta pestry, to the past he went, taking over the body of a barbarian warrior. T he first person he encountered there was Jumper, a giant spider--a nightmar e monster, but a staunch friend and much-needed ally in peril-haunted, anci ent Xanth. Then Dor met Millie--800 years younger, but just as lovely. And he realized that, in his new body, he was no longer twelve years old . .