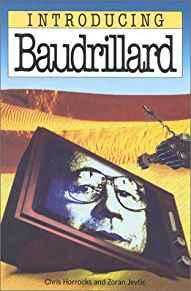 Did the Gulf War take place? Is it possible to fake a bank robbery? Was sex ual liberation a disaster? Strange questions? Nonsensical even? Yet these a re questions to which there are unexpected answers. Jean Baudrillard has be en hailed as one of France's most subtle yet powerful theorists. But his pr ovocative style and assaults on sociology, feminism and Marxism have result ed in accusations of his promoting a dangerous new orthodoxy - of being the "pimp" of postmodernism. This introduction presents Baudrillard's radical claims, including his work on obesity, pornography and terrorism, and a chronology of his evolution from critic of mass consumption to prophet of the apocalypse. Chris Horrocks' text and Zoran Jevtic's illustrations combine to help the reader decide whether Baudrillard is a cure for the vertigo of contemporary culture or one of its symptoms.