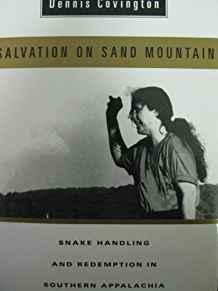 After Covington, a writing instructor at the University of Alabama, novelis t (Lizard) and freelance journalist, covered the trial of a preacher convic ted of attempting to murder his wife with rattlesnakes, he was invited to a ttend a snake-handling service in Scottsville, Ala. He found the service ex hilarating and unsettling; he felt a kinship with the people, for he was on ly two generations removed from the hill country of Appalachia. Of Scottish -Irish descent, the handlers are religious mystics who believe in demons, d rink strychnine and drape rattlesnakes around their bodies. Covington atten ded other services with Brother Carl Porter; he eventually handled a huge r attlesnake, and recalls that at the time, he felt absolutely no fear. This is a captivating glimpse of an exotic religious sect. Copyright 1994 Reed Business Information, Inc.