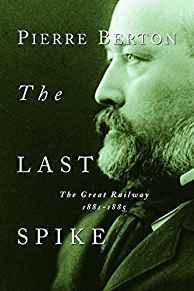 A copy that has been read, but is in excellent condition. Pages are intact and not marred by notes or highlighting. The spine remains undamaged. In the four years between 1881 and 1885, Canada was forged into one nation by the building of the Canadian Pacific Railway. The Last Spike reconstruct s the incredible story of how some 2,000 miles of steel crossed the contine nt in just five years - exactly half the time stipulated in the contract. P ierre Berton recreates the adventures that were part of this vast undertaki ng: the railway on the brink of bankruptcy, with one hour between it and ru in; the extraordinary land boom of Winnipeg in 1881-1882; and the epic tale of how William Van Horne rushed 3,000 soldiers over a half-finished railwa y to quell the Riel Rebellion. Dominating the whole saga are the men who made it all possible - a host of astonishing characters: Van Horne, the powerhouse behind the vision of a transcontinental railroad; Rogers, the eccentric surveyor; Onderdonk, the cool New Yorker; Stephen, the most emotional of businessmen; Father Lacombe, the black-robed voyageur; Sam Steele, of the North West Mounted Police; Gabriel Dumont, the Prince of the Prairies; more than 7,000 Chinese workers, toiling and dying in the canyons of the Fraser Valley; and many more - land sharks, construction geniuses, politicians, and entrepreneurs - all of whom played a role in the founding of the new Canada west of Ontario.