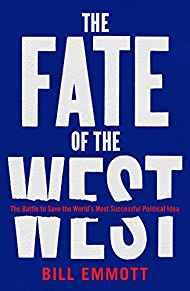 When faced with global instability and economic uncertainty, it is tempting for states to react by closing borders, hoarding wealth and solidifying po wer. We have seen it at various times in Japan, France and Italy and now it is infecting all of Europe and America, as the vote for Brexit in the UK h as vividly shown. This insularity, together with increased inequality of in come and wealth threatens the future role of the West as a font of stabilit y, prosperity and security. Part of the problem is that the principles of l iberal democracy upon which the success of the West has been built have bee n suborned, with special interest groups such as bankers accruing too much power and too great a share of the economic cake. So how is this threat to be countered? States such as Sweden in the 1990s, California at different t imes or Britain under Thatcher all halted stagnation by clearing away the p owers of interest groups and restoring their societies' ability to evolve. To survive, the West needs to be porous, open and flexible. From reinventin g welfare systems to redefining the working age, from reimagining education to embracing automation, Emmott lays out the changes the West must make to revive itself in the moment and avoid a deathly rigid future.

Title: THE FATE OF THE WEST: THE BATTLE TO SAVE THE WORLD'S MOST SUCCESSFUL POLITI CAL IDEA