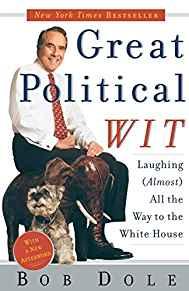 A copy that has been read, but is in excellent condition. Pages are intact and not marred by notes or highlighting. The spine remains undamaged. Bob Dole's political career may not have taken him to the White House, but he did pick up some great stories along the way. In this delightful collect ion, the longtime United States senator shares his favorite anecdotes, witt icisms, and reminiscences. From the campaign trail to the Oval Office, from smoke-filled rooms to the chambers of the Capitol, Bob Dole surveys a century of political wit. There are bon mots from Calvin Coolidge, Winston Churchill, Harry Truman, John F . Kennedy, and a host of other political figures. Bob Dole introduces each section with mirthful moments from his own experience, displaying the gift for wry humor that has made him a favorite guest on late-night talk shows. A jovial--and completely bipartisan--compendium, Great Political Wit is a connoisseur's selection of political repartee at its best.