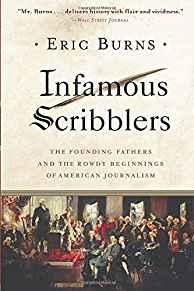 Infamous Scribblers is a perceptive and witty exploration of the most volat ile period in the history of the American press. News correspondent and ren onwned media historian Eric Burns tells of Ben Franklin, Alexander Hamilton and Sam Adams-the leading journalists among the Founding Fathers; of Georg e Washington and John Adams, the leading disdainers of journalists; and Tho mas Jefferson, the leading manipulator of journalists. These men and the wr iters who abused and praised them in print (there was, at the time, no job description of "journalist") included the incendiary James Franklin, Ben's brother and one of the first muckrakers; the high minded Thomas Paine; the hatchet man James Callender, and a rebellious crowd of propagandists, pamph leteers, and publishers. It was Washington who gave this book its title. He once wrote of his dismay at being "buffited in the public prints by a set of infamous scribblers." The journalism of the era was often partisan, fabr icated, overheated, scandalous, sensationalistic and sometimes stirring, br illiant, and indispensable. Despite its flaws-even because of some of them- the participants hashed out publicly the issues that would lead America to declare its independence and, after the war, to determine what sort of nati on it would be.