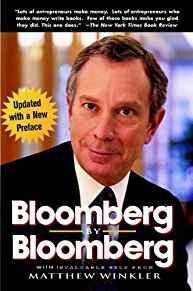 The remarkable story of how Michael Bloomberg created a media empire "Lots of entrepreneurs make money. Lots of entrepreneurs who make money wri te books. Few of those books make you glad they did. This one does." -The New York Times Book Review "A classic tale of a nimble, customer-focused, entrepreneurial David outsma rting bureaucratic, ossified, corporate Goliaths." -Business Week "Entertaining, engaging, and informative, Bloomberg by Bloomberg is packed with great advice about how to start a lean, hungry company-and how to keep it that way." -Bryan Burrough, coauthor, Barbarians at the Gate Brash, aggressive, and supremely self-confident, Michael Bloomberg, the visionary leader of the world's fastest-growing media empire, has been hailed as the new standard for what it takes to win in the Information Age. Dismissed from Salomon Brothers in 1981, Bloomberg immediately took his money and acerbic personality and started Bloomberg L.P. Bolstered by a $30 million investment from Merrill Lynch, the company and the man have been sprinting ahead of the pack ever since. Only twenty years after founding, he's at the top of his industry. And on June 5, 2001, he added mayoral candidate for New York City to his list of accomplishments and aspirations. If elected, powerhouse Michael Bloomberg will bring his own brand of leadership-and personal style-to the city that never sleeps.