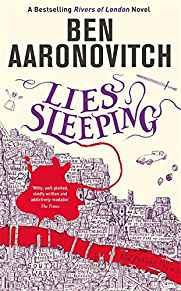 A deadly history. A dangerous mystery. And a dark plan coming to light. IN LONDON, THE PAST IS NEVER DEAD. IT ONLY... LIES SLEEPING * * * * * Martin Chorley - aka the Faceless Man - wanted for multiple counts of murde r, fraud and crimes against humanity, has been unmasked and is on the run. Peter Grant, Detective Constable and apprentice wizard, now plays a key rol e in an unprecedented joint operation to bring Chorley to justice. But even as the unwieldy might of the Metropolitan Police bears down on its foe, Peter uncovers clues that Chorley, far from being finished, is execut ing the final stages of a long term plan. A plan that has its roots in Lond on's two thousand bloody years of history, and could literally bring the ci ty to its knees. To save his beloved city Peter's going to need help from his former best fr iend and colleague - Lesley May - who brutally betrayed him and everything he thought she believed in. And, far worse, he might even have to come to t erms with the malevolent supernatural killer and agent of chaos known as Mr Punch... * * * * * THE 'RIVERS OF LONDON' NOVELS HAVE SOLD OVER TWO MILLION COPIES. DISCOVER WHY THIS IS ONE OF THE MOST-LOVED BOOK SERIES BEING WRITTEN TODAY. 'Charming, witty and exciting' Independent 'Great fun' Simon Mayo, Radio 2 'As brilliant and funny as ever' Sun 'An incredibly fast-moving magical joyride for grown-ups' The Times 'The Rivers of London series is an ever-evolving delight' Crime Review 'A darkly comic read with characters you can't help but like.' Sunday Express.