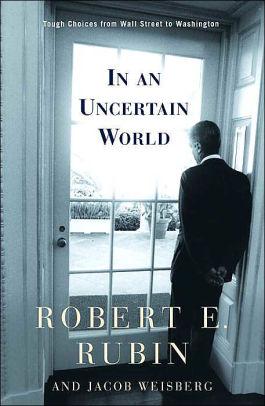 In excellent condition. Pages are intact and not marred by notes or highlig hting. The spine remains undamaged. IN AN UNCERTAIN WORLD opens in 1995 as Robert Rubin is sworn in as the 70th Treasury Secretary of the United States, and only moments later enters int o one of the biggest challenges of his time in the Cabinet: the Mexican pes o crisis. Immediately, we are plunged into the thick of things along with h im, given never-before-revealed insider's insight on some of the most impor tant events in recent American history. Moving on from the Mexican crises, Rubin covers his 26 years at Goldman Sachs; his instrumental role at the NE C, where he was largely responsible for the passage of NAFTA; his term as T reasury Secretary, where he was one of the principal architects of the Pres ident's balanced-budget agreement, spearheaded reforms at the IRS, prevente d the financial crises in Asia and Russia from contaminating the global eco nomy, and resolved the 1997 federal government shut-downs, among many other things. Indeed, Rubin takes us through the whole of his life and career, f rom his New York City public-school days through to his current position as a Director of Citigroup, one of the largest financial institutions in the world. Rubin's life has had an amazing sweep, but even more remarkable is the man behind it: in these pages we learn of his unique philosophy and how he has applied it to every aspect of his life--as a student, an arbitrageur, a manager, a policymaker, and a financier--to stunning success. This is a memoir like none other: it provides startlingly lucid explanations of some of the most complex economic and pol.

Title: IN AN UNCERTAIN WORLD: TOUGH CHOICES FROM WALL STREET TO WASHINGTON