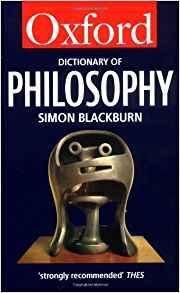 The Gambler's Fallacy, the Dirty Hands Argument, Pascal's Wager, Buridan's Ass, Wittgenstein's Beetle in the Box--philosophical terms can be both intr iguing and baffling. Now, eminent philosopher Simon Blackburn offers the mo st authoritative and up-to-date dictionary of philosophy available in a sin gle volume, packed with helpful information for the novice and with astute observations for the expert. Ranging from Aristotle to Zen, the two thousan d plus entries cover the entire span of philosophy, from the Vedas (written over three thousand years ago) to the most recent technical terminology, w ith ample coverage of important themes from Chinese, Indian, Islamic, and J ewish philosophy. Here are all the terms one would expect to find in a comprehensive dictionary of philosophy--idealism and empiricism, ethics and aesthetics, Epicureanism and Stoicism, deism and pantheism, liberalism and conservatism, existentialism and logical positivism, and much more. Blackburn also defines many terms and concepts not normally found in such reference works, including entries for apathy, Elis (the Greek city which passed a law exempting all philosophers from taxation), laughter, and the meaning of life, and he includes relevant terms from disciplines such as mathematics, physics, biology, artificial intelligence, and linguistics. In addition, there are capsule biographies of nearly five hundred individuals, from the pre-Socratics, to such major figures as Aquinas, Descartes, Spinoza, Locke, Hobbes, Hegel, Kant, Schopenhauer, and Nietzsche, to such contemporary figures as Jacques Derrida, Michel Foucault, Richard Rorty, Simone de Beauvoir, an.