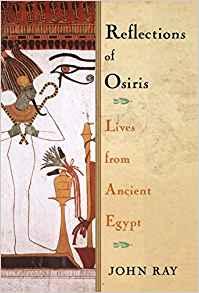 A copy that has been read, but is in excellent condition. Pages are intact and not marred by notes or highlighting. The spine remains undamaged. Spanning more than two millennia, Reflections of Osiris opens a small windo w into a timeless world, capturing the flavor of life in ancient Egypt thro ugh vivid profiles of eleven actual people and the god Osiris. Some of the figures profiled here are famous. Ray discusses Imhotep, whom h e calls "Egypt's Leonardo"--the royal architect of the Step Pyramid, high p riest of the sun cult, and a man of great medical skill. We meet Hatshepsut , a rare female Pharaoh, who had herself depicted as a male figure in templ e scenes, ceremonial beard and all. Horemheb, who rose from local politicia n to general and finally to king. And the legendary magician, Pharaoh Necta nebo II, the greatest builder of temples. Equally intriguing are the lives of everyday Egyptians who are also resurrected here. There is Heqanakhte, a cantankerous peasant farmer who has problems with his sons--and they with their stepmother. And Petiese, a scribe whose petition to the authorities p reserves a feud stretching back over generations. Most fascinating of all a re the people of the Serapeum: a Greek recluse, his brother (a rootless ado lescent and police informer), two temple dancers with financial difficultie s, and a temple scribe. All of whom we come to know intimately--even their dreams. Last comes the god Osiris, judge of the netherworld, creator of the land of Egypt, before whom all would appear at the end of their lives. Reflections of Osiris captures the full spectrum of life in ancient Egypt. With more than twent.