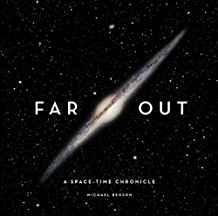 A copy that has been read, but is in excellent condition. Pages are intact and not marred by notes or highlighting. The spine remains undamaged. In Far Out: A Space-Time Chronicle, author and filmmaker Michael Benson ass embles an outstanding collection of astronomical images from observatories around the world and in space. We live in a golden age of astronomical obse rvation. Some of the resulting images are well known and have inspired mill ions of people; others, equally breathtaking, have never been published bef ore. For this book, Benson has culled the very best, and organized them int o a thrilling journey through space and time to the universe's great places , ranging from "nearby" nebulae in our own Milky Way galaxy to the light of the Hubble Deep Field that has traveled billions of light-years. Every bit as innovative and beautiful as the author's successful Beyond: Visions of the Interplanetary Probes but far grander in conception, Far Out is an insp iring work of art and science on the cutting edge of human perception. A Guide to the Cosmos, in Words and Images Dazzling and True ­-New York Tim es Book Review [With Far Out] Take a good long look into space-time. -Los Angeles Times Far out by Michael Benson proves that putting the photographable universe i nto a book doesn't dampen its beauty. - Men's Journal An exquisite picture book of outer space. -San Diego Union Tribune "2001: A Space Odyssey and Far Out: A Space-Time Chronicle: both are inspirational moving pictures. Far Out punches deep into space, like a series of jump cuts. It is a truly cinematic experience to see these magnificent images in rapid succes.

Title: FAR OUT: A SPACE-TIME CHRONICLE