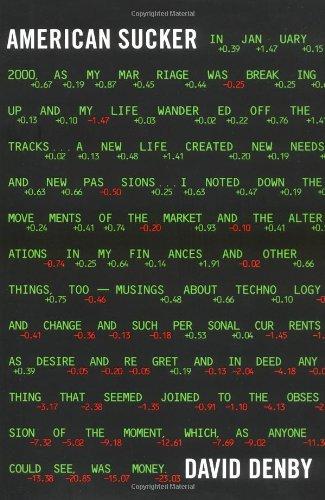 In 2000, the bottom dropped out of David Denby's life when his wife announc ed she was leaving him. To make matters worse, it looked like he might lose their beloved apartment in the split. Determined to hold onto his home and seized by the 'irrational exuberance' of the stock market, Denby joined th e investment frenzy with a particular goal:to make $1 million in one year s o he could buy out his wife's share of their home. Denby gathered courage f rom stock analysts, from the siren song of CNBC, and from tech gurus and ly ing CEOs at investment conferences. He befriended tech stars like ImClone f ounder Sam Waksal and Merrill Lynch analyst Henry Blodgett, both now disgra ced in scandals. He plunged into a season of mania, swept forward on the cu rrents of greed, hucksterism, and native American optimism that caught up s o many in that era-with cataclysmic results. AMERICAN SUCKER is his account of those years of madness and then of recovered sanity, written with the r ueful insight and bitter humor that only a wiser man could attain. What beg an as a money chase developed into an encounter with such eternal issues as envy, time, love, and death. With wit, warmth, and tough-minded candor, De nby explores not only his own motives and illusions, but the whole panoply of desire, greed, and willful blindness that consumed the nation.