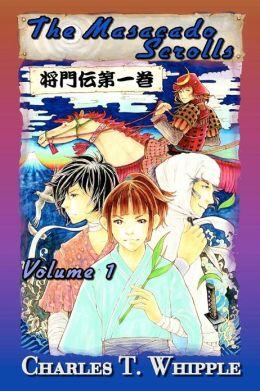 ~ Four action-filled stories of Japanese legends, quests, and fantasy in on e volume from award winning author Charles T. Whipple ~ The Fall of Awa The evil Toh, in a pact with Lord Yami, rampage into the Kantoh kingdoms of th e east. One by one, the kingdoms fall until only the tiny country of Awa re mains. Ryo, the child of Tsubomi, has the gift of reikan, which allows her to sense and see dark forces. She sees evil attacking Nokogiriyama castle a nd rushes to warn Lord Masaharu. Still, the castle falls, Masaharu commits hara-kiri, and Tsubomi and Ryo become slaves of the Funin outcasts. Yet all is not lost. The Shadow Shield Earning a place among the Kage costs Kaku t he little finger on his left hand. He is there Kage warriors capture Nokogi riyama castle, where he first sees Ryo. Now he knows she's the Seeker and s adame calls him to be her Shielder. He must go to her side, even though oni demons, hannama beings, and giant squid bar the way. Picking up two truste d companions, Gulan the Tengu and Nanashi the nameless woman, he battles hi s way to Awa Omote and Ryo. Road to Kio As is the custom, Masacado has a di fferent youth name--Soma-no-Koziro. When he is five years old, the prophete ss sends him on a journey to Kio, the city of the Emperor. Ryo the Seeker, Kaku the Shielder, Gulan the Tengu, and Nanashi the nameless woman accompan y him, together with Kage warriors. They enter a cavern in search of the se cret shrine of Amaterasu, Yami caves it in. All are trapped except Koziro a nd Moribei the wolf. The Horse Soldiers Yotsu horse-soldier mercenaries tra ditionally hire out to the Toh. Noritsugu, captain of the Yotsu contingent.

Title: THE MASACADO SCROLLS VOLUME I.