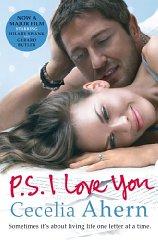 A crisp clean softcover, no markings throughout: Cecelia Ahern's debut novel, PS, I Love You, follows the engaging, witty and occasionally sappy reawakening of Holly, a young Irish widow who must put her life back together after she loses her husband Gerry to a brain tumour. Ahern, the twentysomething daughter of Ireland's Prime Minister, has discovered a clever and original twist to the Moving On After Death concept made famous by novelists and screenwriters alike--Gerry has left Holly a series of letters designed to help her face the year ahead and carry on with her life. As the novel takes readers through the seasons (and through Gerry's monthly directives), we watch as Holly finds a new job, takes a holiday to Spain with her girlfriends, and sorts through her beloved husband's belongings. Accompanying Holly throughout the healing process is a cast of friends and family members who add as much to the novel's success as Holly's own tale of survival. In fact, it is these supporting characters' mini-dramas that make PS, I Love You more than just another superficial tearjerker with the obligatory episode at a karaoke bar. Ahern shows real talent for capturing the essence of an interaction between friends and foes alike; even if Holly's circle of friends does resemble the gang from Bridget Jones a bit too neatly to ignore (her best friend is even called Sharon).