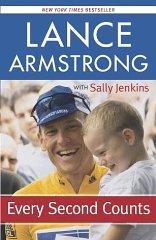 A crisp clean softcover, no markings throughout: In It's Not about the Bike (Putnam, 2000), Armstrong related his battle with cancer and his incredible Tour de France victory. In this book, he gives a gripping account of his second through (record-tying) fifth victories at the Tour. (His latest triumph might be missed by less-than-thorough readers-it's at the very end, following the afterword.) One sees that Armstrong has grown up quite a bit since his first book. However, he still has a reckless streak, as witnessed by his fondness for diving into a place called Dead Man's Hole. There are glimpses into his personal life and reflections on his illness, but this memoir is unabashedly about the thrill of racing and winning with the U.S. Postal Team. Armstrong talks about his teammates with humility and admiration. He also deals frankly, yet with remarkable restraint, with the accusations of doping by the French. The cyclist still works with his Lance Armstrong Foundation against cancer, but readers get the sense that he is definitely looking forward. Warm and informal in tone, Every Second Counts is a must-read for cycling fans.