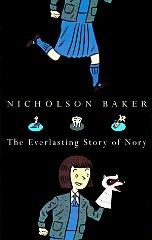 A tight clean first edition (as stated)protected in a new brodart wrapper. Sex and the adult cerebellum have tended to be Nicholson Baker's cherished subjects, and not necessarily in that order. In The Everlasting Story of N ory, however, he turns his literary microscopy in an entirely new directio n, exploring the consciousness of a child. Nory, we are told, "was a nine- year-old girl from America with straight brown bangs and brown eyes. She w as interested in dentistry or being a paper engineer when she grew up." Th is future dentist or paper engineer is also ensconced for a year in the En glish town of Threll, where her family is taking a sabbatical from life in Palo Alto. Baker's novel is endearing, entertaining, and most of all, accurate. The author recognizes that an authentic nine-year-old is incapable of long, intricate narratives, so he divides Nory's story into short (and comically abrupt) chapters. He never credits Nory with precocious wisdom or insight. Instead, Baker concentrates on exactly how a nine-year-old mind works. There is, for instance, that wonderful literalism, which subjects a cliché to strict, heartbreaking scrutiny: "Nory suspected that the straw that broke the camel's back was an unsensible idea anyway, because first of all, stop and think of that poor camel. How could it happen? Doesn't he have something to say about the situation? Also, camels' backs are pretty strong things. If you've ridden on them, you know that they can support at least two people, if not three."

Title: THE EVERLASTING STORY OF NORY: A NOVEL